It has been nearly twenty years since I started writing the book that would become Artifacts, so I have been doing armchair archaeology for a long time. Let me start this conversation by saying that I respect actual archaeologists a great deal. Archaeology encompasses so many physical and social sciences in its quest to tell us who we have been and who we are now, not to mention humanities subjects such as history and literature and language. It is a highly intellectual endeavor that is often accomplished with backbreaking labor and, let’s face it, hours of drudgery. My hat is off to the people who do this fascinating and important work.

My own interest in archaeology is very personal. My mother and sister and I brought home armloads of library books about archaeology over the years, and we had the opportunity to do a little amateur archaeology in the woods behind our house, which was built on the site of an old sawmill that operated around the time of World War I.

Fifty years later, the house where I grew up was built there. If you look behind this picture of my family—that’s me in the yellow dress—you will see a stretch of lawn between the driveway and the pine trees in the background. The grass never grew well in that area, because the earth was packed down in the early 20th century by a railroad spur used to carry the logs away. If you followed that packed earth into the woods, you found logging roads and borrow pits, not to mention trash pits full of really cool stuff that my mother the amateur archaeologist loved to dig up. And scattered through the 20th-century artifacts were arrowheads that were much, much older. 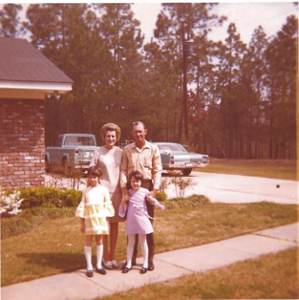 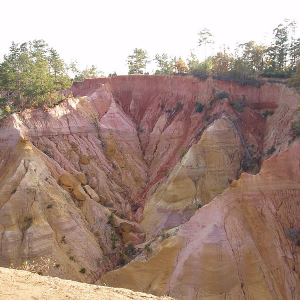 A personal note—I am not a natural finder, so I usually walked right on past the cool stuff. My mother would come along behind me and find it. I gave my archaeologist protagonist Faye Longchamp this knack for finding things that is almost like a sixth sense. Another aspect of my late parents that lives on in my books is my parents’ belief in education. My father always said that “No education is ever wasted,” and this is so very true for novelists. Thus, you’ll find places I’ve been and things I’ve learned buried in my books.

A place I loved to explore as a child, Red Bluff, was transmuted into Great Tiger Bluff in Relics.

And a college summer job working offshore informed my take on the Deepwater Horizon tragedy in Plunder.

In addition to my work on fiction, I research the work of Agatha Christie. As the wife of an archaeologist, Christie wrote about archaeological work in both fiction and nonfiction, notably in Come Tell Me How You Live and Appointment with Death.

I wrote about the links between Christie and archaeology for CrimeReads: On Archaeology and Crime Fiction

I’m often asked why archaeology has been such a popular backdrop for mystery writers over the years. My answer usually has four parts:

Faye and I are glad you’re interested in archaeology and her archaeological mysteries. You keep us digging up trouble!